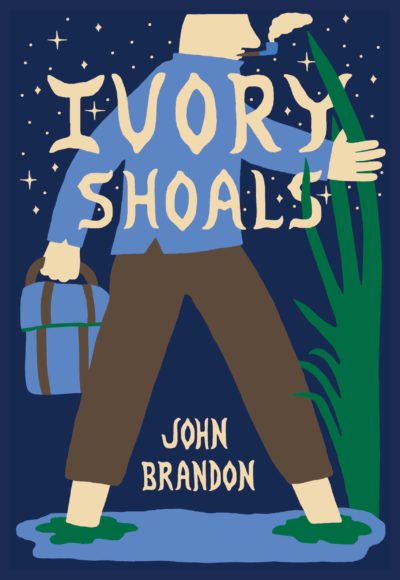 In the tradition of Mark Twain and Cormac McCarthy comes this distinctly American, pulse-quickening epic from John Brandon, the acclaimed author of Citrus County and Arkansas.

Twelve-year-old Gussie Dwyer—audacious, resilient, determined to adhere to the morals his mother instilled in him—undertakes to trek across the sumptuous yet perilous peninsula of post-Civil War Florida in search of his father, a man who has no idea of his son’s existence. Gussie’s journey sees him cross paths with hardened Floridians of every stripe, from the brave and noble to a bevy of cutthroat villains, none worse than his amoral shark of a half brother. Will he survive his quest, and at what cost?

Rich in deadpan humor as well as visceral details that illuminate a diverse cast of characters, the novel uncovers deep truths about family and self-determination as the reader tracks Gussie’s dangerous odyssey out of childhood. Ivory Shoals is an unforgettable story from a contemporary master.

“With Ivory Shoals, Brandon successfully combines a coming-of-age adventure tale with a complex study of class and honor, all while reimagining a classic story of redemption…fans of Brandon will relish this raucous yet moving road novel.”
—Vol. 1 Brooklyn

“Ivory Shoals is a bracing mix of Florida history and fleet adventure, livened with dry wit and a tender regard for its characters. Take a walk across the state with Gussie — you won’t regret it.”
—Tampa Bay Times

“Cinematic and featuring a plot full of old-timey moral clarity where virtue and villainy delineate themselves sharply, Ivory Shoals is a gripping yarn that unfolds a tapestry of ‘Humanity wicked as one could conceive, or as worthy.’”
—Minneapolis Star Tribune

“I opened John Brandon’s new novel and fell hard. An adventure full of pluck and wonder, far-flung and yet uniquely, specifically American. I hope I never recover.”
—Daniel Handler, author of All The Dirty Parts, Bottle Grove, and Why We Broke Up

“John Brandon is a marvelous storyteller. With diamond-cut elegance and wit, Brandon’s suspenseful tale depicts a young man’s search for kinship in a beguiling and often terrifying world. Ivory Shoals is a book of grit, heart, and intricate beauty.”
—Patrick Cottrell, author of Sorry to Disrupt the Peace

“What a grand adventure, beautifully told, marbled with wickedness and small miracles, glowing with heart.”
—Jack Pendarvis, author of Movie Stars and Your Body is Changing

“John Brandon writes with a simple-looking declarative thrust that rarely permits subordination, or what Ian Frazier calls ‘riders,’ and riders make for fey yammering. Brandon tells you what his characters want, and you want it too. The effect of this strong forward telling is not entertainment, not story, but hypnosis. Brandon does not yammer. You won’t put the book down, you won’t want it to end.”
—Padgett Powell, author of Edisto and The Interrogative Mood

“From shades of Homer and Twain, Cormac McCarthy and Charles Portis, John Brandon has conjured a poignant and heart-racing adventure story all his own. Twelve-year-old Gussie Dwyer’s journey across the ruins of post-Civil War Florida feels at once as old as time and mysteriously modern, as we navigate our own wounded American wasteland.”
—Brett Martin, GQ correspondent and author of Difficult Men: Behind the Scenes of a Creative Revolution, From The Sopranos and The Wire to Mad Men and Breaking Bad