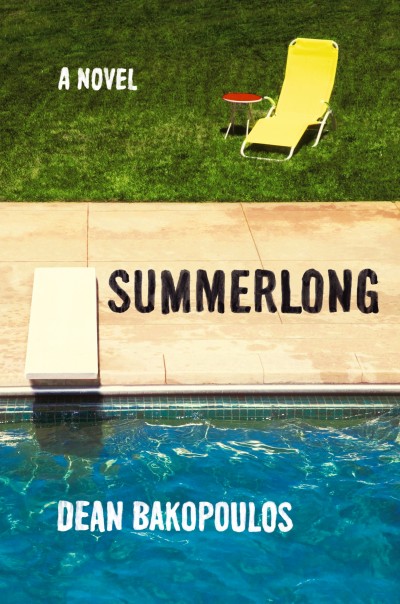 The author of Please Don’t Come Back from the Moon and My American Unhappiness delivers his breakout novel: a deft and hilarious exploration of the simmering tensions beneath the surface of a contented marriage which explode in the bedrooms and backyards of a small town over the course of a long, hot summer.

In the sweltering heat of one summer in a small Midwestern town, Claire and Don Lowry discover that married life isn’t quite as they’d predicted.

One night Don, a father of three, leaves his house for an evening stroll, only to wake up the next morning stoned, and sleeping in a hammock next to a young woman he barely knows. His wife, Claire, leaves the house on this same night to go on a midnight run — only to find herself bumming cigarettes and beer outside the all-night convenience store.

As the summer lingers and the temperature rises, this quotidian town’s adults grow wilder and more reckless while their children grow increasingly confused. Claire, Don, and their neighbors and friends find themselves on an existential odyssey, exploring the most puzzling quandaries of marriage and maturity. When does a fantasy become infidelity? When does compromise become resentment? When does routine become boring monotony? Can Claire and Don survive everything that befalls them in this one summer, forgive their mistakes, and begin again?

Award-winning writer Dean Bakopoulos delivers a brutally honest and incredibly funny novel about the strange and tenuous ties that bind us, and the strange and unlikely places we find connection. Full of mirth, melancholy, and redemption, Summerlong explores what happens when life goes awry.

“Dean Bakopoulos is a great talent–everything he writes is full of insight and inspiration and the best kind of divine comedy.”
— Lorrie Moore

“Summerlong is Dean Bakopoulos at his finest: daringly funny, heartbreakingly sad, and forever on the watch for redemption. This is a book for any season, any reader, anywhere–it shimmers with magic, lust, and love.”
— Nickolas Butler, author of Shotgun Lovesongs

“There is no better guide through a hot summer in the heartland than Dean Bakopoulos…Lovers chasing all over the joint, the glorious wreckage, and Bakopoulos with his keen eye, his sympathy and his wit, there to see all.”
— Jane Hamilton

DEAN BAKOPOULOS is an author from Detroit, Michigan. He is an assistant professor of English at Grinnell College in Grinnell, Iowa. Dean’s third novel,Summerlong, will be published by Ecco/HarperCollins in June 2015. He is currently at work on a nonfiction book called Undoing, as well as a screenplay and a television pilot.

Dean’s first novel, Please Don’t Come Back from the Moon (Harcourt, 2005), was a New York Times Notable Book; his screenplay adaptation of the novel is being developed for the screen by James Franco’s Rabbit Bandini productions; His second novel, My American Unhappiness, published in 2011 by Houghton Mifflin Harcourt, was named one of the year’s best novels by The Chicago Tribune.

He received his BA from the University of Michigan and his MFA from the University of Wisconsin-Madison. In addition to teaching fiction and creative nonfiction workshops at Grinnell, Dean has taught creative writing at UW-Madison, Iowa State University, and the MFA Program for Writers at Warren Wilson College. The winner of numerous awards, including a Guggenheim Fellowship and a National Endowment for the Arts fellowship, Dean also reviews books for The New York Times Book Review and ​The San Francisco Chronicle.